The holidays have always been a time for me to remember those who have gone on before me — a large extended family descended from Italian and Irish immigrants. Christmas day was usually split between the two families and never together in the same place. The two enthnicities were still very much at war in my Boston suburb!

The holidays also meant visiting cemeteries to decorate graves. Those memories were brought back on Decemember 11, when I participated in the Wreaths Across America program at Arlington National Cemetery. For the 19th consecutive year, the Worcester Wreath Company of Harrington, Maine donated balsam fir holiday wreaths. Thousands of volunteers gathered early to place 20,000 wreaths in four sections of the cemetery. Special wreath ceremonies were conducted at the Kennedy Family Memorial, the Battleship USS Maine Monument, and the Tomb of the Unkowns throughout the morning. 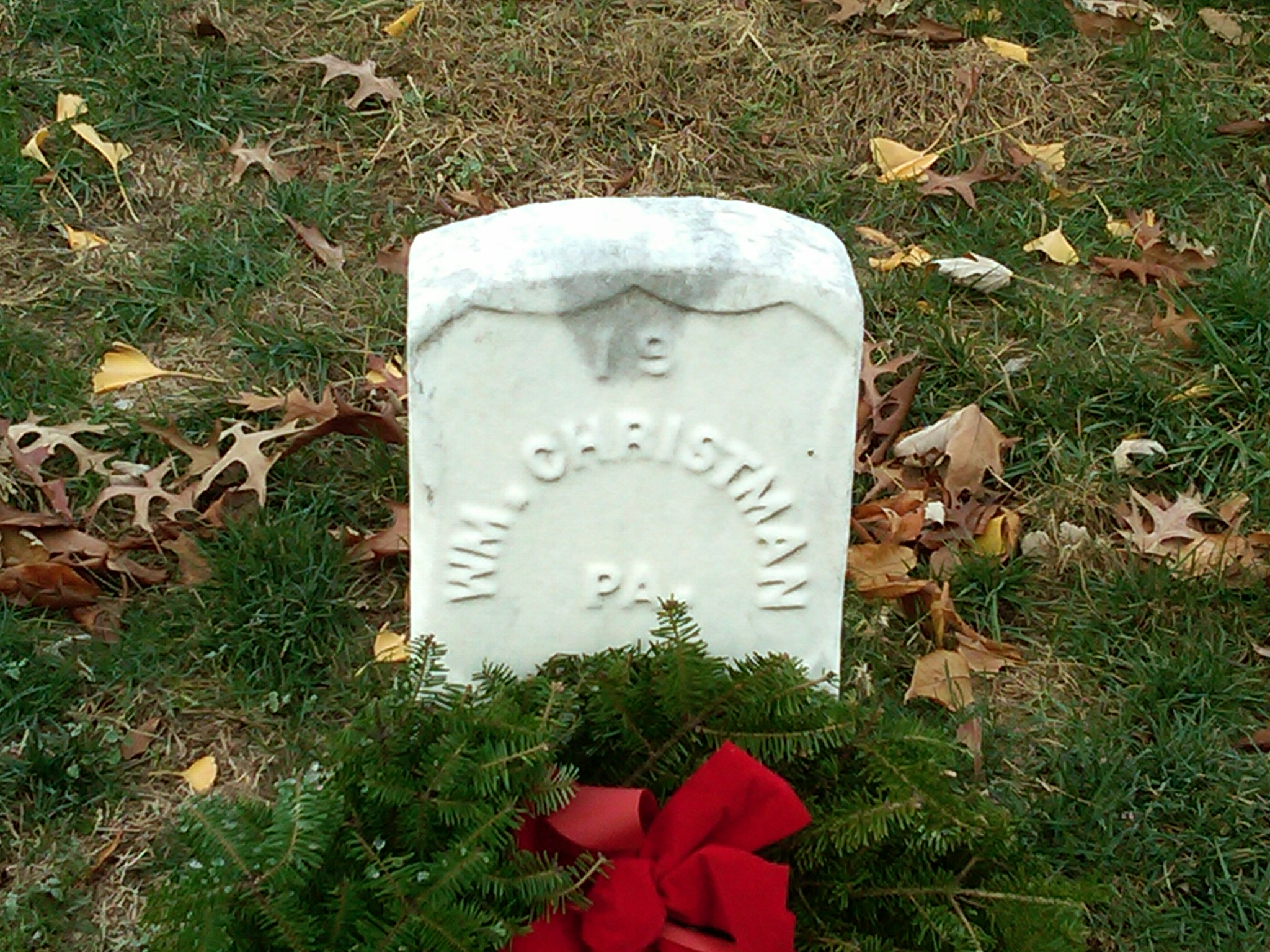 I chose to honor William Henry Christman, the 19 year old Union soldier who died before seeing battle and became the first burial at Arlington and Arthur Halligan, the father of a former colleague from the New York Public Library who served in World War II, Korea, and Vietnam.

I learned about Pvt. Christman after reading Robert’ Poole’s On Hallowed Ground, and from the records we have at the National Archives. He died on May 11, 1864 of peritonitis and was buried on May 13 in what is now section 27 of Arlington National Cemetery.

From these records, we learn that he was a laborer from Lehigh County, Pennsylvania who enlisted on March 25, 1864. We can see his signature on his enlistment record.

We also learn from his enlistment record that he had grey eyes, sandy hair, and a florid complexion.

Contained within the records is a letter William Christman wrote to his family from Philadelphia on April 3, 1864, less than two weeks after his enlistment. William’s mother, Mary A. Christman, submitted the letter as part of a pension application. He starts off, “My dear Mother” and tells them that he is well and has enough to eat and drink.

He sends instructions to his father in regards to papers, money, and land for when he comes back. He ends the letter with a P.S. to excuse his poor handwriting because he had to write on a his plate, so he couldn’t write as good as he ate.

The details contained in the records help us remember William Christman and give us a glimpse into his life. As I laid a wreath at his grave, I was able to truly appreciate this young man’s story.

I want to thank Wreaths Across America for giving me the opportunity to remember and honor William Christman. To learn more about the program and how you can help clean up wreaths on January 29, 2011, visit www.wreathsacrossamerica.org.

2 thoughts on “A Time For Remembering”