As American combat operations in Iraq draw to a close at the end of August, here at the National Archives we are always thinking about the records. The records created to document the conflict are crucial for our understanding of our military operations. It’s our history at stake. The Chief Historian for the European Theater in World War II, Colonel William A. Ganoe, said it best:

History is the last thing we care about during operations and the first thing we want afterwards. Then it is too late.

It may be difficult to conceive of troops in the field ever thinking about records, but without records we lose our history, our lessons-learned, and the ability to analyze our successes and failures.

This past April, Michael Carlson and John Powell, two NARA staff members, spent time in Iraq supporting the Joint Staff’s assessment of the U.S. Forces-Iraq records management. NARA staff will be working closely with CENTCOM as they bring records from the combat operations in Iraq back to the United States. We will work together to identify records that have permanent historical value in both paper and electronic form.

As the conduct of war has changed over the years, so has the associated record keeping practices. Today’s military operations in Iraq and Afghanistan are documented in both paper and a multitude of electronic formats, including PowerPoint, email, video, spreadsheets, databases, etc.

The documentation of our military conflicts dating back to the Revolutionary War can be found within the vast quantity of records at the National Archives. Historians, veterans, researchers, and genealogists rely on the records of war to tell our story as a nation, as well as individuals.

The records of war have been crucial evidence in a variety of situations, including supporting historical studies, support for veterans benefit claims, documenting military awards, resolution of missing in action (MIA) claims, identification of remains, and discovering lost records.

The story of Francis Lupo is just one compelling example of the importance of records in the identification of our fallen soldiers. In 2003, French archaeologists discovered a set of human remains during a survey for new construction. Based on artifacts found in the grave, the remains were turned over to the U.S. Department of Defense. Historical records found within the National Archives were used by the Joint POW/MIA Accounting Command in Hawaii to identify Francis Lupo, Private, Company E, 18th Infantry Regiment, 1st Infantry Division, from Cincinnati, Ohio. 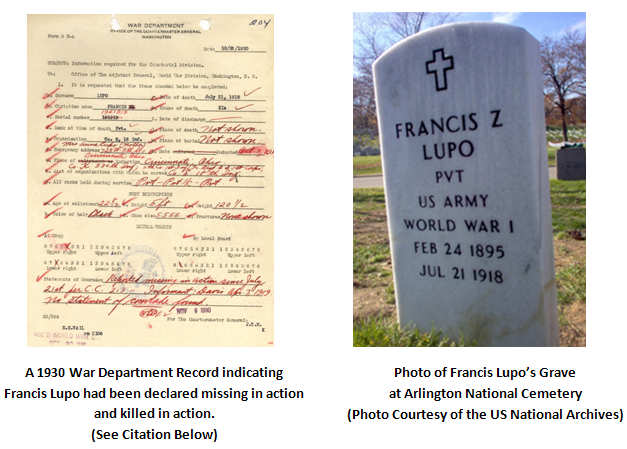 War Department records indicate that Private Lupo had been declared missing during the Second Battle of Marne in July 1918 and then later declared killed in action. Based on his missing in action status, his name had been inscribed in the chapel of the closest American Cemetery in France. His mother had visited the cemetery in 1931 on a tour of World War I Gold Star Mothers. In 2006, Private Lupo was interred in Arlington National Cemetery.  The ceremony was attended by his 73-year-old niece who had been born 15 years after he had been killed.

While the records of war are essential to our understanding of combat operations, the importance of records is paramount to individual veterans and their families.

We can’t forget about records, even in times of war.

What are your experiences researching war records? What stories have you uncovered about your family members?

3 thoughts on “The Records of War”