At the National Archives and Records Administration, we care for our nation’s most beloved documents. The Declaration of Independence, the Constitution of the United States, and the Bill of Rights are our most well known national treasures, but in the stacks there are many others, some of them not yet discovered. At a researcher meeting last month, I met Jonathan Webb Deiss, a researcher at the National Archives. His knowledge, passion, and enthusiasm for discovering treasures makes him a model citizen archivist. Jonathan told me how he found a previously undiscovered Revolutionary War diary in Record Group 46, Records of the U.S. Senate. As a knowledgeable and skilled researcher, Jonathan knew that Samuel Leavitt’s Journal to Westpoint was important. One can easily imagine his excitement and anticipation in that moment of discovery. 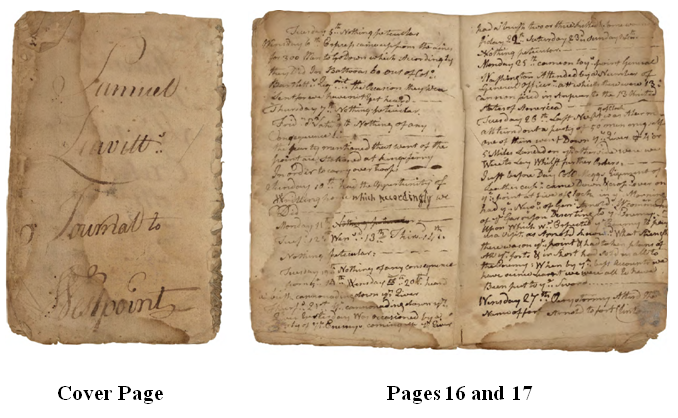 Jonathan told me that Samuel Leavitt was a soldier from Stratham, New Hampshire. He enlisted in early July 1780 to serve a three month tour. The journal starts on July 5, 1780 and covers his march to West Point, his tour of duty, and march back to New Hampshire in October 1780. On page 17 of the diary, Samuel Leavitt describes General Washington at West Point and hearing the “news of Gen’l Arnold the commander of the Garrison deserting to the Enemy.” Watch the following video of Jonathan describing his discovery, details of the diary, and research he has done on Samuel Leavitt.

Read the transcript of the video.

Jonathan’s discovery proves there are still treasures to find within our records. With almost 10 billion things, we don’t know what researchers, historians, and citizen archivists will find in the future, and what kind of impact their discoveries will have on scholarship and our understanding. Citizen archivist discoveries, like the Revolutionary War diary, will be added to our existing descriptions of our records. As I said in my earlier post, “Cultivating Citizen Archivists,” I think this type of collaboration is crucial. In rethinking our traditional approaches, we need to leverage the knowledge and expertise of citizen archivists. In the following video, Jonathan discusses the importance of citizen archivist discoveries.

Read the transcript of the video.

It’s great to see Jonathan still so excited about his discovery. Have you discovered a record that you know is important, but only a few people have seen? I hope you’ll consider sharing your discoveries on our Archives wiki, a pilot project that will be launched this summer. This space will allow you to share your researcher, tips, and treasures. If you’d like to be involved in this project, please email socialmedia@nara.gov for more information.

In the meantime, it would be great to hear from you about your research experience.

What is your most exciting find in the records of the National Archives?

What are you still hoping to discover?

One thought on “Citizen Archivist Discovers National Treasure in the Stacks”