Last week I had an opportunity to address the Preservation Section meeting of the Society of American Archivists.  The theme of the meeting was holdings protection—balancing access to holdings with safeguarding them.  And two of our Holdings Protection staff, Larry Evangelista and Richard Dine participated in a panel discussion reporting on what we have accomplished to date in this area.  My remarks at the meeting were an opportunity for me to reflect on my many years of worry on this topic:

We’ve come a long way from the time when books were chained to shelves but I often wonder if maybe that wasn’t such a terrible way to provide collection security!  Daily we all deal with the tension between protection and access. 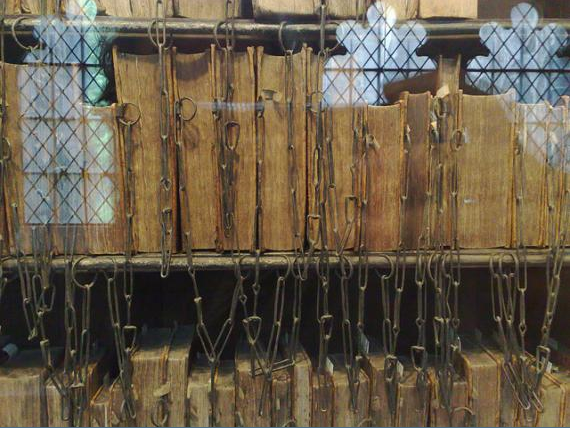 I have spent my entire career worrying about and dealing with collection security issues.  As a shelver in the Humanities Library at MIT, my morning duties included clearing the reading room tables and reshelving.  There I discovered the journals with articles ripped out, books in the Women’s Studies section which had been mutilated, the era of Winslow Homer woodcut engravings sliced from Harper’s Weekly.  The Sex Collection was kept in a locked cage in the basement because of theft!  During my 31 years there I dealt with the disappearance of many years of the Street Railway Gazette, the theft of a first edition Leaves of Grass, an elevator shaft decorated with 3M detection strips removed from the spines of books, and the stash of marijuana hidden in a hollowed out Boy Scout manual!

I knew that this theft thing had become an obsession when at dinner at the Hampshire House restaurant in Boston (if you’ve seen Cheers, it is the real restaurant about the real pub in the opening scenes).  The walls of the restaurant are lined with bookcases.  Across the room, at eye level, I spotted a call number on a spine!  Sure enough.  Stolen from Boston University.  To the embarrassment of my dinner partners, I spent the evening collecting SIX titles to be returned to various Boston Libraries.

At Duke University compact discs and DVDs being processed had to be secured in locked cabinets in the catalog department.  The entire new edition of the Encyclopedia Britannica disappeared one night.

At the New York Public Library a circulation staffer created a fake user and charged out hundreds of DVDs to a bogus account.  E. Smiley Forbes III walked off with at least 72 maps from the rare book and maps collections—many of them the ONLY copies known to exist.  And just 36 have been recovered.

And now at the National Archives, I arrived after the Sandy Berger document in his sock caper and the disappearance of the Clinton hard drive—a back up file on a MyBook device.  But in time for the alteration of a Lincoln document by a well respected expert long known to the staff.  And the arrest of a long time NARA staffer—expert in our film and video collection—for the removal of a significant number of materials from the Archives.  And today we are dealing with the Barry Landau and Jason Savedoff case.  They are charged with stealing documents from the Maryland Historical Society, the Connecticut Historical Society, Vassar College, Yale, the Smithsonian, New York Public, University of Vermont, the Library of Congress, and, yes, the National Archives–handwritten speech drafts from the FDR Library.

So…you see I have some history!

Thanks for the opportunity to share my thoughts with you.  This is a subject about which the Archivist of the United States is dead serious.

So what are we doing to help prevent theft at the National Archives?  Among other things, the Archival Recovery Team works vigilantly to investigate allegations of missing, alienated, and stolen Federal documents from the National Archives.  And you can help!  Learn more about missing documents, and follow the latest news from the Archival Recovery Team on their Facebook page.

4 thoughts on “Reflections on Collection Security”