I want to thank you, Jack, for visiting the National Archives recently to discuss your book, On American Soil: How Justice Became a Casualty of WWII.

Your book is a powerful example of the importance of the records of the National Archives. You tell the story of Private Guglielmo Olivotto, an Italian POW who was murdered at Seattle’s Fort Lawton. How did you first learn of Private Olivotto’s story? 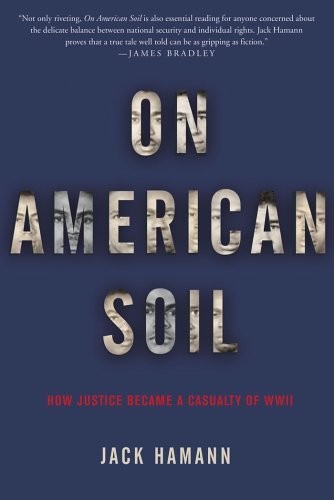 In 1986, while a young news reporter, I attended a dreadful public hearing at Seattle’s Discovery Park, the former site of a large US Army installation called Fort Lawton. The hearing–about the proposed expansion of a sewage treatment plant adjacent to the park–was dull as dishwater. Sensing my boredom, a park employee mentioned a mysterious World War II headstone in a remote Fort Lawton cemetery. As I soon discovered, it was the grave of Italian prisoner of war Guglielmo Olivotto, still interred on American soil decades after his August 14, 1944 death at age 33. I was stunned to learn that 43 US soldiers–all of them African-American–eventually stood trial charged with rioting and with Olivotto’s death by lynching. After a year of research, we aired a television documentary about that astonishing trial.

After your September 1987 documentary, “Discovery Park Graves,” what made you doubt the story and prompt you to research it further?

The documentary had primarily accepted Jaworski’s theory that black soldiers in the segregated 1944 US Army had grown to resent that white commanders treated them little better than the Italian prisoners housed right across the street. Jaworski had convinced the court that simmering resentment boiled over the night of August 14, 1944, fueling a riot and Olivotto’s lynching. Years after the documentary first aired, friends and colleagues often expressed discomfort about its unanswered questions and incongruous assertions. In particular, it was the only case in American history where black men stood trial accused of a mob lynching; didn’t that raise a red flag or two? And why had a trial which attracted worldwide attention during the war simply disappear from American history books? In 2001, with many more years of reporting experience under our belts, my wife, Leslie, and I realized that the documentary had relied primarily on secondary sources –1944 news articles and such–rather than on primary sources. Determined to learn more, we set out on a journey which eventually led us to the National Archives.

When you and your wife, Leslie Hamann, began researching at the National Archives in College Park, did you know what you were looking for?

We hoped it might take a few hours to locate the court-martial case file. Instead it took weeks to discover something altogether more intriguing and powerful.

Three African American soldiers were prosecuted for first degree murder and forty others for rioting. Leon Jaworski prosecuted what would become the largest court-martial of World War II. What did you discover in the records of the National Archives about the court-martial?

It turns out that the U.S. Army knew–in advance of the trial–that its detectives had thoroughly botched the investigation of Olivotto’s murder, and that the defendants had been fingered by highly-suspect informants. The shocking details were in a formerly-classified report–supported by hundreds of pages of sworn testimony–that Leslie discovered filed in the “Miscellaneous” section of the Archives’ World War II collection. Even more shocking was proof that Leon Jaworski himself had a copy of that investigation, yet fought successfully to keep it out of the hands of the defendants’ Army-appointed lawyers. Some of the most important primary documents from the Fort Lawton case are being made available in the “Jack and Leslie Hamann Collection” in the San Francisco-based Internet Archive, http://www.archive.org/details/hamann.

Did you have any idea when you began your research that it would eventually lead to honorable discharges and reparation for the men who were wrongly accused and convicted?

It took a fair amount of persistence by certain members of Congress, led by Rep. Jim McDermott, to demand that the US Army reopen the case some six decades later. Even then, we had little expectation that the US Army Board of Review would issue such a stinging rebuke to Jaworski, concluding that he had committed “egregious error” in his prosecution of the case. The honorable discharges and reparations were so unexpected that we still have a hard time believing it really happened.

What did your research discover about who likely murdered Private Olivotto?

By process of elimination, there was only one man who had the means, the motive and the opportunity to lynch Private Olivotto. He was a white Military Policeman, who had been in the middle of ongoing conflict between white soldiers and Italian prisoners of war, and who was later quietly court-martialed himself for abandoning his post during the very time Olivotto was lynched. He was never charged with Olivotto’s murder, and died in 1999.

While conducting your research at the National Archives, did you discover any related topics you wish you could write about, or topics that other historians should pursue in our records?

We certainly believe there is much to be written about Leon Jaworski’s long and otherwise distinguished career …perhaps by someone with an insider’s knowledge about Texas law and politics. We also think there is a goldmine of unpublished material about questionable military and civilian shenanigans during the immediate post-WWII period. Weary of the war, and eager to move the country back to “normal,” many suspicious events occurred during 1945-49 in places like Japan and Western Europe.

I understand that not all of the men or the families of the 28 men who were wrongly convicted have been found. Who should they contact to get more information?

If someone believes that a family member was one of the Fort Lawton defendants, we hope they’ll consider contacting the U.S. Army Board for Correction of Military Records in Washington, DC. Many families still out there may be able to collect their loved one’s honorable discharge plus a check, with interest, for the time he was interned.

One thought on “Interview with Jack Hamann, Author of On American Soil: How Justice Became a Casualty of WWII”